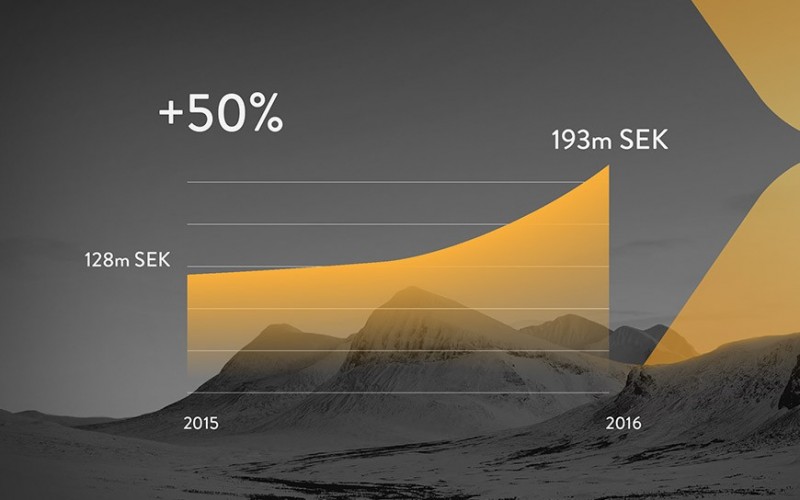 Vaimo, a leading global provider of e-commerce solutions on the Magento platform, increased its sales in 2016 by 50 percent to 193 million SEK, while the operating profit amounted to 15.7 million SEK. The company predicts continued strong growth and is exploring various strategies to raise capital for further expansion.

Vaimo experienced strong growth in 2016, with an increase in turnover by almost 50 percent to 193 million SEK and the number of employees burgeoning to just over 300 with an increase of about 80 individuals.

However, the profit of 15.7 million SEK in 2016 was somewhat lower than in previous years, because of several reasons, including a major investment in staff training related to the launch of the new Magento 2 version as well as an increase of almost 50 percent in the number of developers during the year.

During 2016, Vaimo added 50 new clients to their portfolio, such as Stiga, Sova, and Make Up Store in Sweden, Sixpad in Japan and Alyasra in the Middle East, as well as several global projects such as Agent Provocateur, Helly Hansen, and MRP Group.

“We are extremely proud of what we achieved last year. We spent immense time and resources training our employees on the new Magento 2.0 version that was released at the end of 2015 and we see that this has strengthened our competitiveness enormously. Despite the heavy investments in the new version training, we managed to achieve a growth of 50 percent. Our growth is driven by a strong demand for our services and we took on several major global projects last year. We strengthened our position and took big leaps towards our goal of becoming the leading Magento solution partner in the world,” said David Holender, CEO of Vaimo.

In regard to the future, Vaimo has a variety of opportunities for continued growth and expansion, both organically and via acquisitions. Because of the great demand for Vaimo’s services, consolidations are likely. Vaimo is currently considering various strategic options to fund growth.

Recently, Vaimo was also appointed as one of five Magento Global Elite partners in the world (read more here). The selection criteria includes company turnover, global presence, and the number of Magento certified developers working in the company. In addition to signifying quality of services and products, this also allows Vaimo to cater for a diverse range of clients in varying industries on the Magento platform.

Get in touch with us today to learn more!