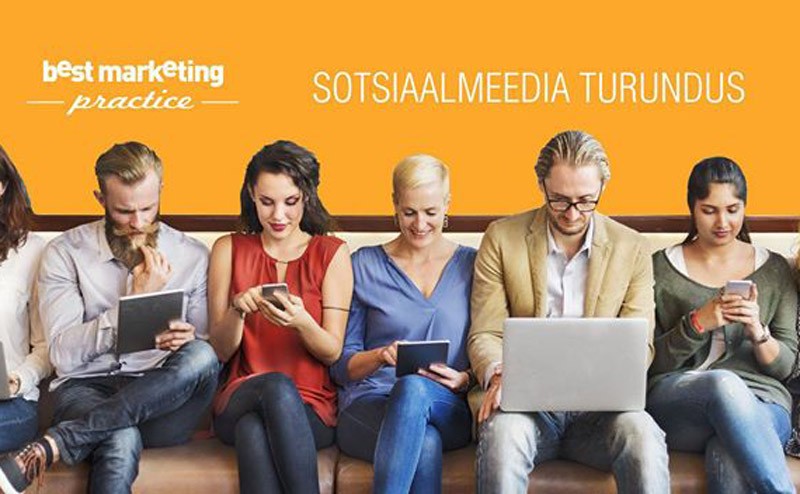 On April 12th, 2017, Bliss Conference Centre hosted a “Best Marketing” marketing conference about how to market in social media like a professional; read about the event here in Estonian. The conference was designed to introduce practical methods to Estonian businesses to navigate the social media landscape. This year, the conference promised to delve deeper into the technical side and look more at statistics and numbers. The Estonian social media market’s current state was reviewed, and attendees learned from the best across different businesses and industries. “Best Practice” is a seminary format which puts focus on sharing practical advice along with real-life examples and experiences. The presenters shared personal stories and takeaways about best practices in social media marketing.

The first presenter, Hanna Sölveborn, Social Media Manager at Swedish digital agency Allrise Media, spoke about “Data-Based Social Media Marketing.” Hanna shared that Facebook is not a sales channel, but a low-intent medium that allows companies to have a unique possibility to connect with their fans. New formats are popping up all the time, like live stories, messenger, 360, etc. While anyone can buy traffic, it’s data that helps us make better choices, optimise campaigns, and make plans for the future. The most important aspect is that this method produces results, not only “likes.”

According to Hanna, the most common mistakes with social media marketing are:

Hanna advised asking WHY the campaign should exist, WHAT is the main goal, are several campaigns needed, and WHO is the audience? Hanna stressed that you should consider the audience, how you will evaluate what is working DURING the campaign, and WHEN you will stop the campaign. Hanna shared several case studies about targeting different audiences via different social media channels; for example, a new store opening campaign targeted parents through Facebook and children through Instagram.

The straight-forward advice was to always consider your audience; for example, if you are a company sharing news on Facebook that you have donated money to charity, most likely, no one will care. People share interesting and relevant news on Facebook. Hanna suggested that companies use current news in their posts to interact with the audience.

But how do you know what’s relevant for your audience?

Next up was Diana Räbbin, Estonian channel TV3 Marketing Manager, who spoke about a popular current TV show, “Trial Marriage,” a reality show involving two bachelorettes who live with three separate strangers for one week each to test the potential for a romantic relationship.

Diana shared that TV3 regularly posts introductions about what’s coming next on the popular reality show during the whole season via Facebook, Instagram, Twitter, and Youtube. She urged listeners to know your audience; for example, their main audience is women, ages 20-39, so their content is shown in a specific way. Diana also advised to make sure your targeted content is not shown to the wrong group to avoid bombarding them with different ads.

Diana said that she put herself in the customers’ shoes and asked herself..

Why should I follow TV3’s Facebook page? What will I gain from this as a fan of this show?

When it came to this reality show, the problem was that it was a brand new show in Estonia, with unknown main “characters.” The television station promoted the content of the show before the premiere via their different social media channels.

An interesting phenomenon occurred after the first episode; fans created their own Facebook page for the show, titled “The Best of Trial Marriage,” where they posted self-made memes. The page garnered immense popularity, but it did start influencing the reputation of the show. While the first page eventually was shut down, more fans started creating memes and sharing them. The problem was inappropriate content, and viewers crediting the memes to TV3. Still, engagement was off the charts, and fans promoted the show themselves.

Before the finale of the first season, the TV station encouraged fans to tag a friend who could potentially participate in the next season. The show was ultimately successful; two people did find one another and became a couple.

Moral of this presentation: we can influence the content fans create, but we cannot control it.

Kristel Leif, Social Media Manager at Swedbank, spoke about the bank’s social media journey, and how to reach an audience from a stereotypically “boring” business. They began their digital venture by posting large amounts of varied content on Facebook, but they soon learned to focus on content that is relevant for their audience.

Kristel spoke in detail about the bank’s various Youtube campaigns, and projects together with young local Youtubers. This was a way to work with local social media influencers and thereby connect with a younger audience. The bank created a campaign to find “Estonia’s Best Youtuber” that became popular.

Swedbank has also created videos to promote their new products, like a new bank card that allows customers to check out faster in-store. The video featured a competition between two teams checking out in a local supermarket.

Kristel encouraged audience members to think about what is relevant in social media, and what is most likely to be shared by your audience. She also said that all of their videos are created in-house by Swedbank’s marketing team, which means you don’t have to spend a lot for effective marketing; you just have to know your audience. Swedbank also uses hashtags to promote different campaigns and encourage followers to share their own content.

Shardee Rebas, Digital Marketing Manager at “Visit Estonia” spoke about their social media channels: Facebook, Instagram, Twitter, and Snapchat. Shardee said that Visit Estonia was surprised to find that most of their target audience hung out in Snapchat, and they created a game in relation to Weekend Festival Baltic last summer.

Kaja Sepp, Head of Communications at Estonian postal service Omniva, shared that they are most active on Facebook, and they currently have 630,000 Facebook fans in the Baltic states. They create competitions to win free postage, and free products in online shops where the Omniva service is offered. Their main target group is women, and they usually offer discounts for beauty products, pet products, and children’s products. They also deal with employer marketing in LinkedIn and use hashtags to convey the feeling of what it’s like to work at Omniva, and encourage their employees to participate in the campaign.

Jaan Kruusma, Chief of Social Media Marketing at 7Blaze, spoke on “How to change Estonian businesses to become more benevolent, grateful, and customer-centric through social media.” Jaan encouraged first and foremost for social media marketers to be personally active in social media; after all, how can you sell cars without ever having driven one?

The presenter made attendees sit next to a stranger at the conference, and find each other on Facebook (on the condition that you were not already friends). This drew attention to the way you personally represent yourself on social media, both publicly and privately to friends.

But what is social media? Let’s take Facebook and Instagram. Is it distorted reality? Narcism? A channel of information and communication? Entertainment?

Ultimately, Facebook is a social media platform, and it’s like a digital campfire. You want people to sit around your campfire; the bigger your flame, the more people you will attract.

Finally, Brit Mesipuu, CEO and Founder, Marketing and Advertising at Milos, and  Rene Rumberg, Social Media Manager at  MediaCom, held an open discussion about the current landscape of social media marketing in Estonia.
Contact us for more information!
Hello!