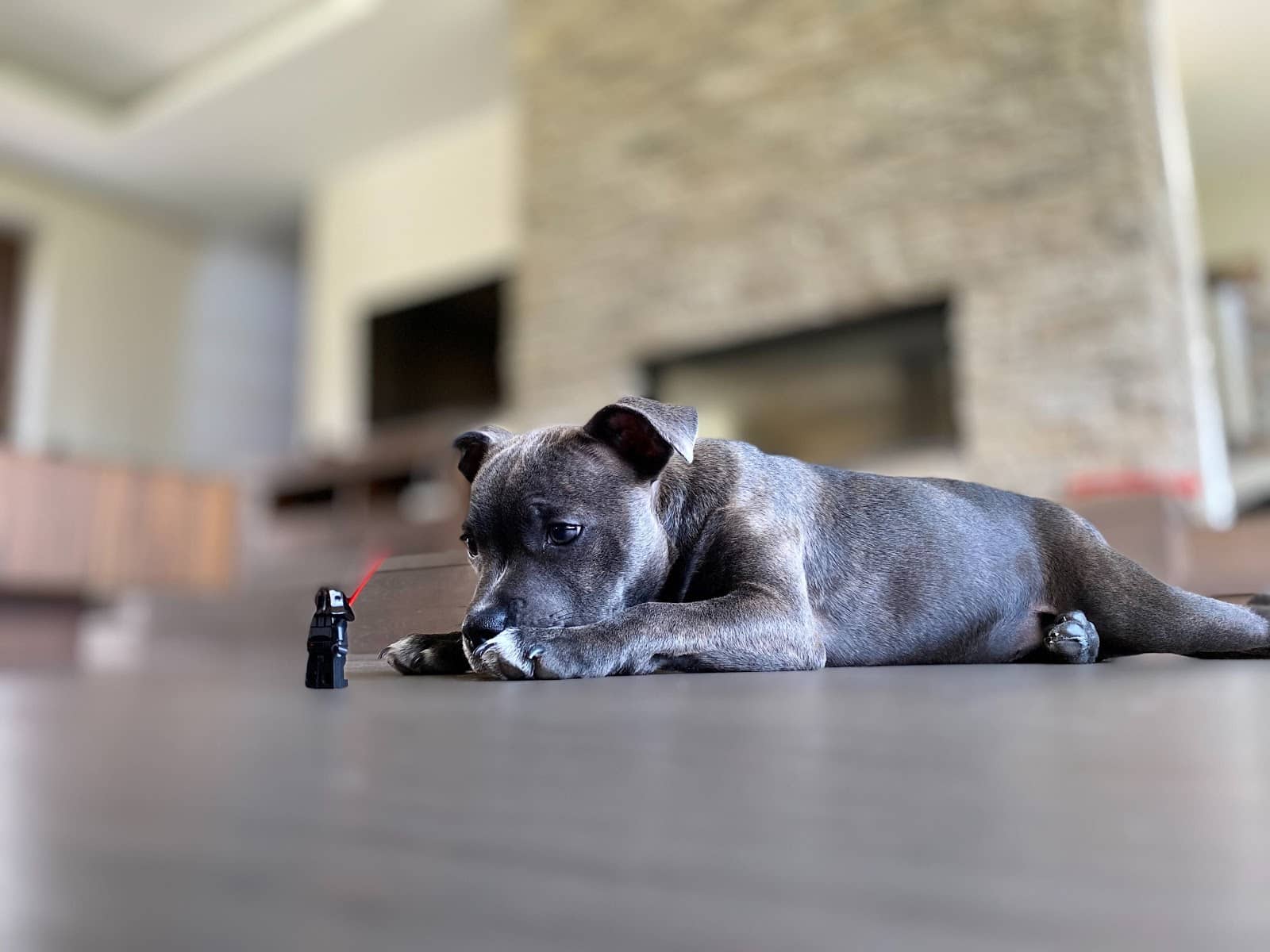 Vaimo is honouring Star Wars Day and bringing you something different from our usual posts. Enjoy a brief look into another part of the galaxy. #Maythe4thbewithyou

A long time ago, in a galaxy far, far away…

It is a period of immense disruption. Rebel companies, striking from a hidden base, have won their first victory against the evil Galactic Empire.

Rebel spies gathered key intelligence to launch a new online store to counteract the Empire’s ultimate weapon, the Death Store, a heavily fortified payment and purchasing station with enough power to destroy any competition standing in its way.

Pursued by the Empire’s sinister agents, Princess Leia races home aboard her starship, holding stolen plans that could save her clients and bring better eCommerce to customers around the galaxy.

On the way to bringing eCommerce to the galaxy, the Sith Lord Darth Vader, an agent of the Empire, captured Leia by intercepting her starship. With nowhere else to go and with the rebel cause facing the threat of imminent demise, Leia gave the plans to both her trusted droids: R2-D2 and Droid C-3P0.

The two droids land in an unknown territory, scared and defenceless, they are captured by Jawa traders and subsequently sold to Luke Skywalker’s Uncle.

how could Leia steal the most coveted plans in the universe? 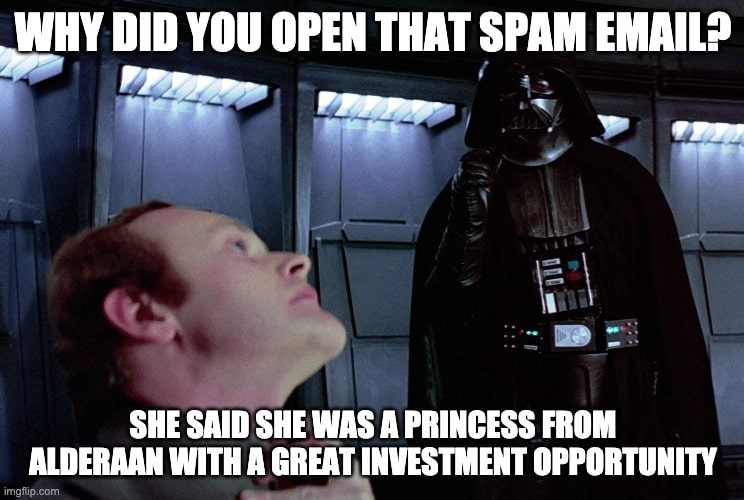 Find out how hackers use uncertain times like the current COVID-19 crisis to breach gaps in your security. Our Business Development Manager for Security, Olga Gutenko, will tell you more.

An event occurred that every company – good or evil – fears: a hacker, cybercriminal, or just a rebel (the good guys in this case) finds a hole in a site’s security and exploits its vulnerabilities, going undetected for months. If it can happen to the Empire, it could happen to you.

In times of struggle – like a battle between good and evil to decide the fate of a galaxy – hackers can take advantage of vulnerabilities in your system. Whether through Magecart or a front-end attack on a company, even after repeated removal of malware, like in the case of the NutriBullet Attack hackers still had access to their infrastructure. This is the case of the ever-present threat that Princess Leia posed against the Galactic Empire even after Darth Vader intercepted her ship. Her access to key secrets to the Death Store’s weaknesses ultimately led to the rebel’s resurgence.

The Vaimoers, also known as Jedis, have an excellent Data Breach Monitoring Tool. In response to the threat to all businesses, they developed a tool that detects all major breaches (Magecart attacks, supply-chain attacks, skimming and form-jacking) in real-time. The tool runs scripted user journeys on your site, comparing outgoing server addresses to whitelisted addresses and acting on any new, suspicious activities. With this immediate alert mechanism. Vaimo’s Data Breach Monitoring Tool reduces detection time—and the potential impact on your business—from days, weeks, or months to just minutes. If Darth Vader took security breaches more seriously, the Death Store might still be the most powerful store in the universe.

What did the rebels do next? They began their Magento 2 Migration.

To remain ahead of the competitive curve, the rebels needed a robust and flexible eCommerce platform. One with the functionality to provide engaging and seamless purchasing experiences for their customers across the universe. And this is something that Magento 2 offered in abundance. Magento 2 gave a secure foundation that also had the scalability and flexibility to help the rebels thrive.

After purchasing the two droids, Luke returned home to repair them. But a most mysterious event occurred. A hologram projected from R2-D2:

“General Kenobi. Years ago you served my father in the Clone Wars. Now he begs you to help him in his struggle. I regret that I am unable to present my father’s request to you in person, but my ship has fallen under attack, and I’m afraid my mission to bring you to Alderaan has failed. I have placed information vital to the survival of the Rebellion into the memory systems of this R2 unit. This is our most desperate hour. Help me, Obi-Wan Kenobi. You’re my only hope.”

But who was Obi-Wan Kenobi? Young Luke Skywalker considered who this person might be, “I know an old hermit, ‘Old Ben,” He fit the description.

Why did Leia seek help from Obi-Wan?

Obi-Wan Kenobi was a Magento Master, a Vaimoer, most distinguished from his many battles to deliver seamless omnichannel solutions across the galaxy. The information stored within R2-D2 possessed the plans to guide the Magento 2 migration and launch a legendary eCommerce site. But, it is necessary to note, that Obi-Wan was a Vaimoer: he could do much more than just lead a site migration. Obi-Wan could incorporate the oldest and newest knowledge floating around the universe to save the Rebellion.

Before launching the eCommerce site and putting the rebel plans into action, Leia wanted Obi-Wan to use the Force, a deep power that connects between all things, all customers and companies, which can create a legendary customer experience. The customer experience (CX) represents almost every touchpoint your client has with your company. Success cannot be achieved without this vital knowledge.

Among all living things in the universe, only a few possess the ability to feel and use the Force. Since such individuals are hard to find, Leia asked Obi-Wan with great urgency to provide a Customer Experience Rating to understand what the rebels could do to defeat the mighty Death Store.

The CXR is composed of 150 parameters and reveals deep insights into how a customer perceives an eCommerce experience. This process saved significant budgetary resources, which the rebels did not have and feared their new site launch would go to waste. Instead, Obi-Wan helped Luke Skywalker and his crew of renegades focus only on the areas of high impact. 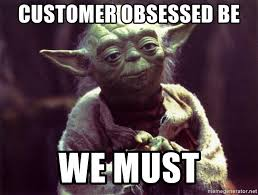 To learn more about what customer obsession is and why it matters, click here to learn more.

How PIM helped the Rebels Have One Source of Truth.

Having escaped stormtroopers and left Tatooine with the help of Han Solo and Chewbacca, the rebels saved Princess Leia but lost Obi-Wan who was killed by Darth Vader.

The rebels needed one source of truth for all the information they gathered. Granted, this situation differs a little from the one typical businesses face. But, still, you might be asking yourself: What happens when you have lots of information that’s scattered, spread across different sources (in some cases across galaxies) and hard to get at? At this point, information is no longer empowering — it actually becomes a hindrance. In the migration, the Vaimo Jedi helped the rebels migrate to a single source of truth.

Why did they do this?

Preparing for the Big Launch

As the rebels prepared for their big site launch, they had already went over the game plan. Yet they still had a billion thoughts flying through their heads as they analysed each aspect of their planned launch and scrutinised the site design, layout, and performance. The use of a checklist beforehand can save you from having any large errors. For instance, the pilots who first created the pre-flight checklist to avoid skipping over fixable issues went on to fly a total of 1.8 million miles without one accident. 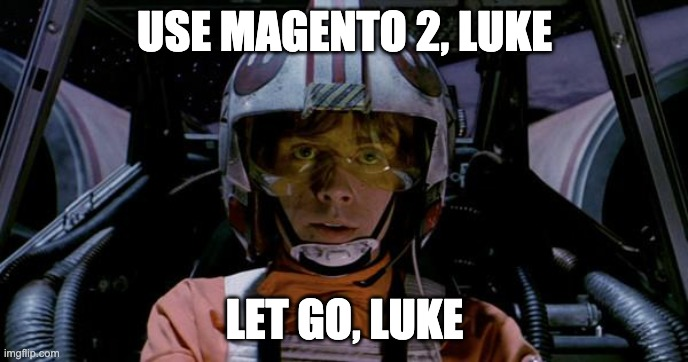 As a result of the various successful measures taken, the rebels were able to launch a successful site and defeat the Death Store. With the migration to Magento 2 along with help from Vaimoers in a multitude of sectors, the rebels made an incredible advance with their new site. What was thought impossible – the defeat of the Galactic Empire was completed with the help of the Vaimo Jedi and the use of the Force!

But Who are the Vaimo Jedis?

The Vaimoers are an ancient Jedi group hailing from Sweden and honed their skills in numerous avenues. In so doing, they have become an Adobe Digital Experience Platinum Solution Partner. The group has grown to encompass 147 certified Magento 2 Jedis. It is the largest group in the known universe. Here are a few pictures of the most fearsome Jedis in the galaxy. 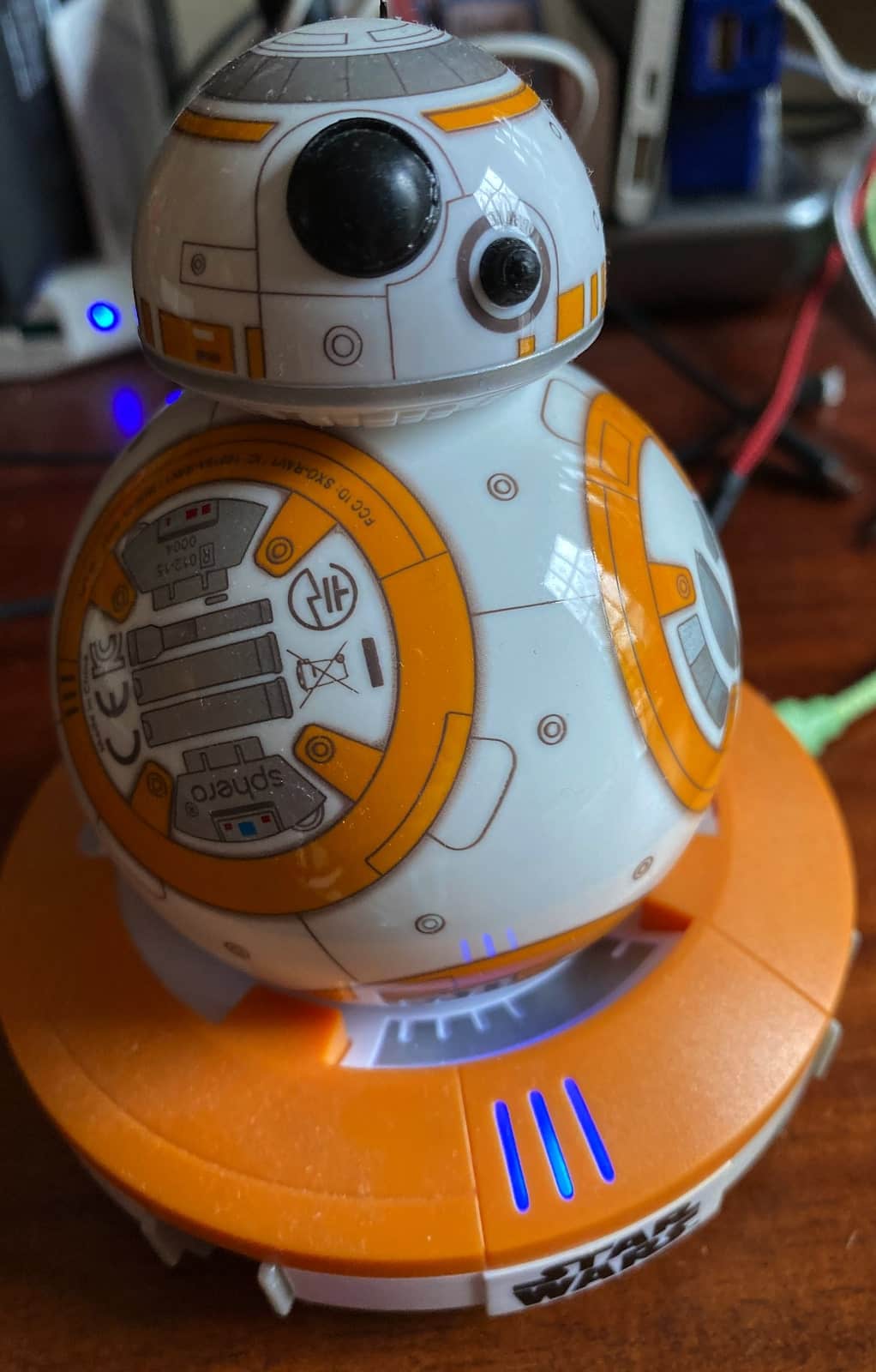 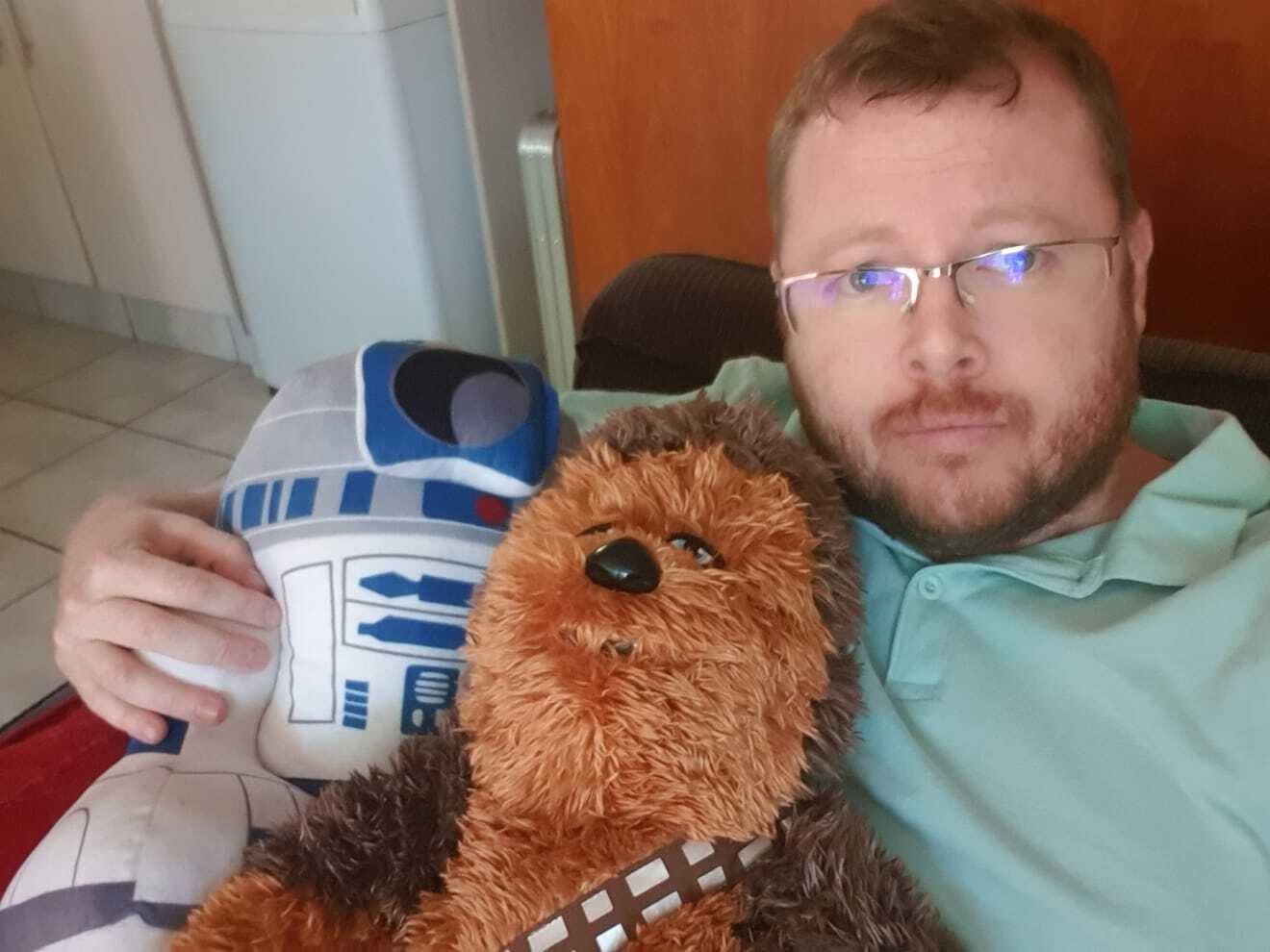 A Vaimo Jedi poses with his beloved droid and baby Wokee. Adult Wookies are typically taller than most humans, averaging 2.21 meters.

In the coming weeks, we will focus on a key question that intergalactic parents are asking, “Is my child going to the dark side? Is their desire to become a stormtrooper just a phase?” Subscribe to our newsletter below for more information. The answer may surprise you!

We are a galactic leader in delivering award-winning digital storefronts, omni-channel solutions and mobile apps. Our only focus is to drive digital commerce success for our brand, retail, and manufacturer clients. With 15 offices on Earth and a few more to be built in Sector 3827, we have an intergalactic presence that cultivates close, long-term relationships. With a focus on driving digital innovation our services cover the full-spectrum of commerce needs ranging from strategy, design, development, optimisation, cloud services, into wherever commerce initiatives reach. We deliver solutions around B2B, B2C, Omni-Channel, PIM, Order Management, and Business Intelligence. If you would like to learn more about how we can help you contact us here.